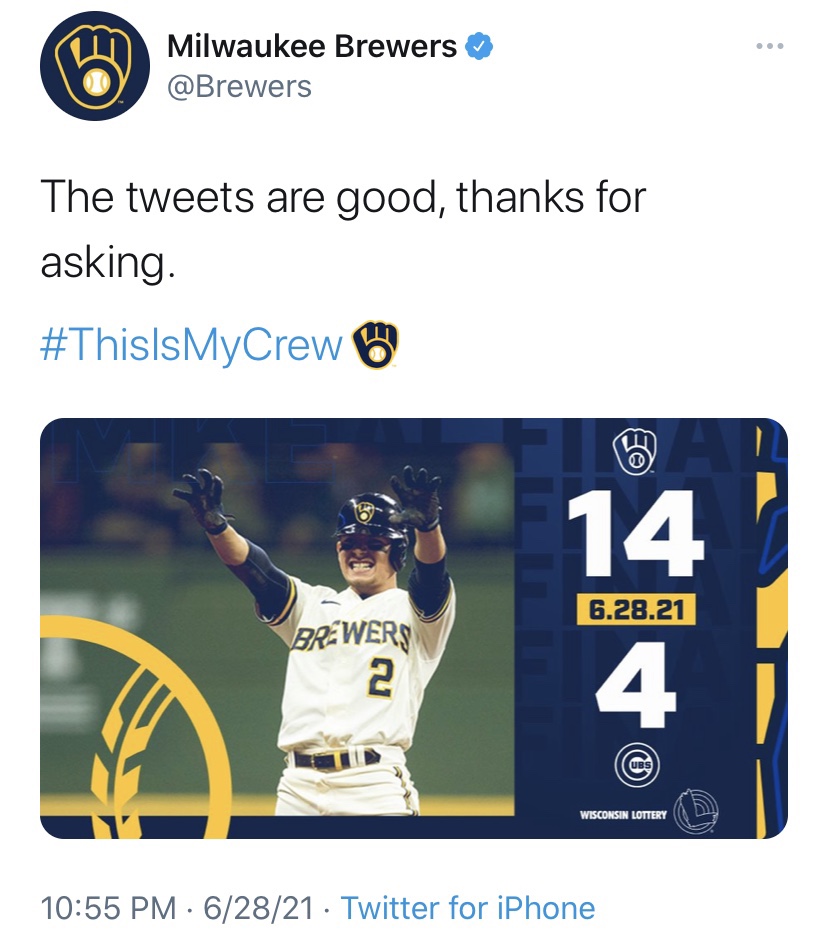 The Milwaukee Brewers (46-33) erupt for a 10-run bottom of the eighth in a 14-4 win over their arch-rival the Chicago Cubs (42-37) tonight at American Family Field in the opener of this three-game I-94 Rivalry series.

Gosh, it’s so disappointing to see the Cubs bullpen throw up all over themselves tonight at Am Fam Field in front of some of their Old Style-swilling fans…

I do, however, appreciate the Cubs fans making the trip up to help our economy out.

Freddy Peralta went six great innings, allowing two runs on two hits, walking four and striking out eight. Even though he gave up the two runs, his stuff was electric tonight.

Brad Boxberger allowed two runs in the seventh inning to allow the Cubs tie the game at 4-4.

Devin Williams (5-2) picked up the win by pitching the top of the eighth. Williams struggled, he allowed a single and then walked two batters to load the bases. He was fortunately able to get out of the inning, but he’s not exactly fooling batters like he was in 2020.

I think getting out of the bases loaded top of the eighth inning gave the Brewers a spark for the bottom of the inning.

I will fully admit, I was not particularly a huge fan of the trade giving up two pitchers who had been throwing well for the Brewers to get Willy Adames, but he has been phenomenal since he’s been in a Milwaukee uniform.

This game felt like a playoff game. It’s a big win for the Brewers because they extend their first place lead to four games over the Cubs.

The Brewers and Cubs will play again tomorrow. First pitch is scheduled for 7:10 PM (Central Time).

Brandon Woodruff (6-3, 1.89 ERA) will get the start for the Milwaukee Brewers.