I’m going to start by saying I needed nitroglycerin pills for this game.

The Wisconsin Badgers (17-11) took down the Penn State Nittany Lions (11-14), 75-74, in the second round of the Big Ten Tournament at Lucas Oil Stadium in Indianapolis.

Leading 75-74 with less than 10 seconds to play, UW needed one stop to win the game. Nate Reuvers blocked Sam Sessoms shot and Brad Davison snared the loose ball and with great awareness called timeout with eight tenths of a second left before falling out of bounce. It was a hell of a play by both Reuvers and Davison, but it absolutely never should have come to that. Reuvers and Davison saved UW from what would have been an unbelievably bad loss. 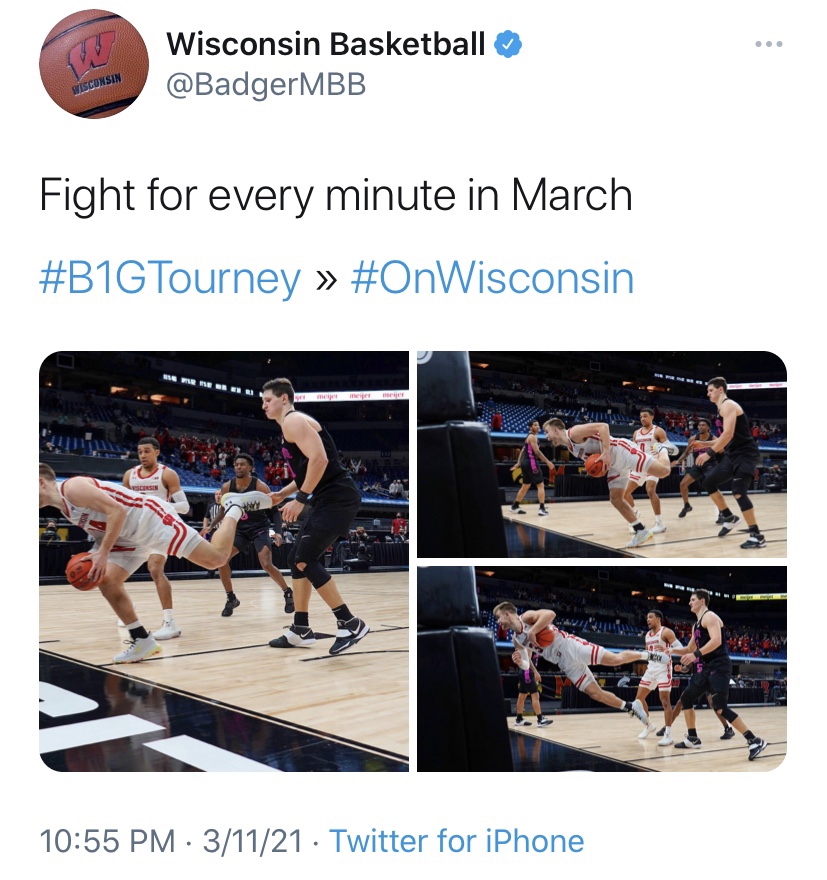 You can say what you want about Brad Davison, but the kid wants to win for the Wisconsin Badgers more than anyone.

UW played a phenomenal game on both ends of the court and took a 68-50 lead after a Tyler Wahl layup with 7:47 left in the game.

UW stopped running offense and played too much isolation ball and little to no movement. Then Badgers not getting stops in the final minutes sounded all to familiar until the final play of the game.

It was an unnecessarily exciting finish. It had all the makings of a classic state of Wisconsin sports chokefest.

At the end of the day, all that matters this time of year is surviving and advancing!

The Badgers had an energy tonight that I hadn’t seen all year. It reminded me of the final eight games last year en route to the Big Ten regular season title when the team juiced and screaming, jumping up and down after big plays.

Brad Davison postgame said: “That was some of the most energy we played with in a long time. We’ve got to play 40 minutes.”

Head Coach Greg Gard postgame said: “I thought we got too tentative against their pressure. It made us stand around. It took some of our aggressiveness away. We had some opportunities to convert plays against it and we didn’t finish plays off.”

The Badgers will play the Iowa Hawkeyes (20-7) tomorrow night in the Big Ten Tournament Quarterfinals. Tip-off will be 25 minutes after the Illinois/Rutgers game, so approximately a 8:00 PM (Central Time) tip-off time for Badgers/Hawkeyes. The game will be televised on Big Ten Network (BTN).