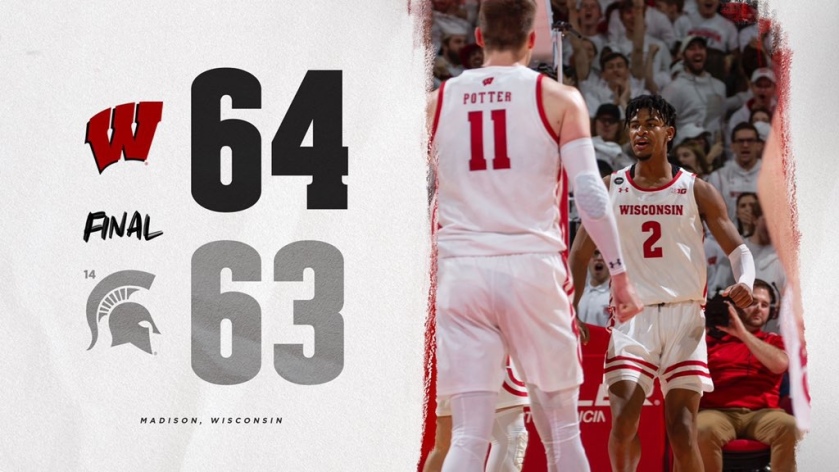 After a week of adversity, the Wisconsin Badgers did just enough to beat No. 14 Michigan State at the Kohl Center.

With Brad Davison out due to suspension and Kobe King leaving the program, D’Mitrik Trice and Brevin Pritzl stepped up in a big way for UW. The two each played 39 minutes, they combined for 24 points, 13 rebounds, five assists and just two turnovers.

The Badgers only had seven scholarship players available in today’s game. All seven played, and walk-on Walt McGrory got three minutes of action.

Junior Aleem Ford played a great game. Ford played 34 minutes and scored 13 points on 5-of-6 shooting. His back-to-back 3-pointers late in the second half were huge for UW because the Badgers were struggling to get anything going offensively. Aleem was also big on the defensive end, helping limit MSU to just two offensive rebounds in the second half. It was Ford’s best all around game this season and arguably his career.

The not so good part of the game was that Wisconsin didn’t make a field goal in the final 7:27 of the game and scored only four points in that span from the free throw line. That comes five days after the Badgers only scored five points in the final 7:13 of the loss to Iowa. Luckily the defense stepped up big time.

When Kobe King left the program earlier this week, he told the Wisconsin State Journal that he felt Gard treated him like a servant, only interested in how he could help the coach win games. One national writer, Rob Dauster, said the program had fallen into disarray with the Davison and King news. That, combined with losing three of the last four games, led to at least some boos when Gard was introduced prior to the game.

Plenty of former players came to the defense of Greg Gard on social media after Kobe King’s comments.

The Wisconsin Badgers coaching staff and team have been through more adversity than any in the country this year. Coach Gard is a heck of a coach and as quality of a person as there is, particularly in the slimy business of sports. I’m proud as hell he’s the coach of UW.

For those that have been telling me that Coach Gard needs to be fired, I expect to hear from you after today’s game once you open the curtains in your basement. Can’t have it both ways.

Gard and staff deserve a ton of credit for this win. Everyone came together in the midst of adversity.