The Milwaukee Brewers got a much needed win on Friday night when they took down the Chicago Cubs 3-2 in the first of a three-game series. 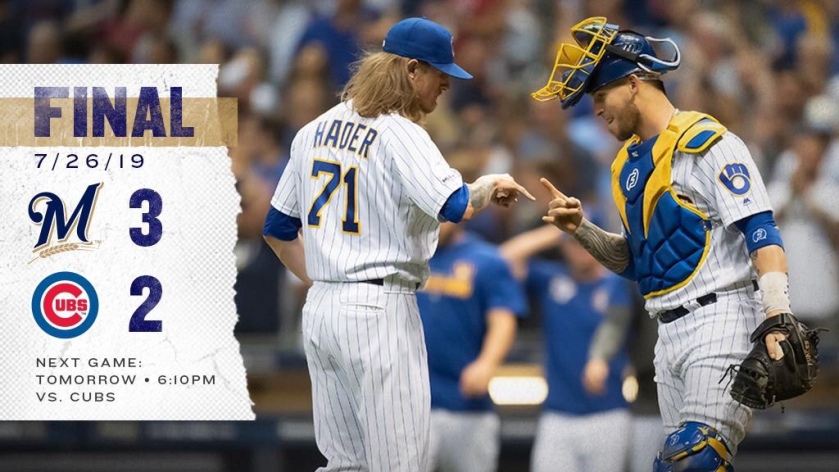 It was a defensive battle all night. Neither team scored a run for the first five innings. Gio Gonzalez and Kyle Hendricks showcased a classic pitchers duel with excellent defense behind them. Both defenses put on a highlight reel of great plays early on.

In the first inning, Lorenzo Cain made a sliding catch on a liner from Anthony Rizzo and doubled off Kris Bryant off first.

In the bottom of the first, Ian Happ made a beautiful sliding grab into the wall robbing Mike Moustakas.

In the second inning, Gonzalez showed off his reflexes snagging a line drive that came right back at him.

Gonzalez pitched a gem, going 6 1/3 innings, giving up two earned runs on three hits, while striking out nine. However, he had to leave the game with left shoulder tightness. It was his best start of the season and his second start since returning from nearly a two-month stint on the IL.

“With Gio, we’re kind of day to day,” Brewers manager Craig Counsell said. “He really just stiffened up is what we’ve got right now. We’ll see how he is tomorrow and the next day. We’re not ruling him out for his next start. He got stiff. That was a long inning. He felt like he couldn’t get loose through that inning and there was some stiffness there with that warmup pitch that he threw, so we stopped it.”

The Brewers offense found some life in the eighth inning beginning with rookie phenom Keston Hiura drawing a one-out walk off Brandon Kintzler. Then, Kintzler hit Thames putting two men on base.

Pedro Strop came into replace Kintzler and hit pinch hitter Ryan Braun on his first pitch to load the bases. Next, Jesus Aguilar popped up.

With Gamel up with the bags loaded and two men out, he came up big once again with a single that scored two, giving the Brewers a 3-2 lead.

This has to be looked at as the biggest win of the season so far for the Brewers. It was a fun game and had multiple big time moments. The fans brought it as well making it a playoff-type atmosphere. Still, there’s a lot of work that needs to be done for the Brewers. A win on Saturday will go a long way as they try to work their way up in the NL Central standings.