The Milwaukee Brewers were desperate for a win, especially since the Chicago Cubs had won earlier in the day. Ben Gamel delivered in the clutch in the Bottom of the 9th to give the Crew the much needed win.

Zach Davies pitched well, going six innings while throwing 105 pitches. Davies gave up an unearned run in the top of the first, but was great the rest of the way.

The Brewers outhit the Giants by a wide margin, but failed to capitalize on plenty of opportunities until the eighth and ninth innings.

The bullpen struggled once again. This time, Junior Guerra came in to replace Davies in the sixth inning and struck out the first two batters he faced, then the trouble began. Guerra allowed a single which ended his night. Alex Claudio came in and allowed consecutive singles giving the Giants a 2-1 lead.

The Brewers hit three straight doubles in the eighth inning and ultimately had a 4-2 lead entering the ninth inning. But the Giants tied the game off Jeremy Jeffress. It was the second game in a row the Brewers bullpen blew a late lead.

In the bottom of the ninth, Ryan Braun led the inning off by reaching on a Brandon Crawford error. Two outs later, Keston Hiura walked and Gamel followed with the walk-off double scoring Braun for the winning run.

“It was a big hit,” Brewers manager Craig Counsell said. “A two strike hit. It helps us for tomorrow, but more importantly, it’s a win.” 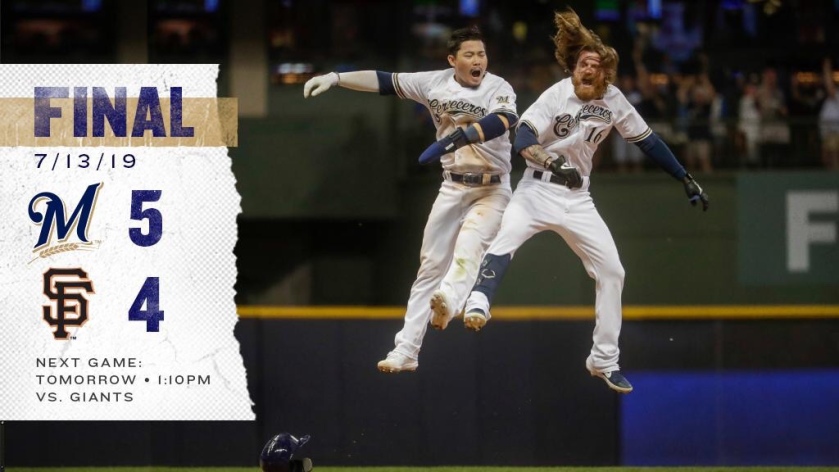